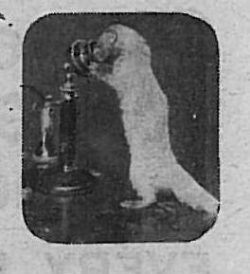 ” On Friday evening last, at 7.30 o’clock, as the good fairy ‘The Phynnoderee’ was busily working – as all good fairies do – turning out our ‘Weekly Times’ at some 4,000 copies an hour, a sharp tinkle, tinkle rang out on the telephone bell in the ‘Times’ Office.

On lifting the receiver, a voice boomed forth: “The ‘Dalby Spook’ is speaking – the first public call from Dalby – and I wish ‘The Phynnoderee’ in the ‘Times’ Office every success and prosperity.”

‘The Phynnoderee,’ on hearing this cheerful message, redoubled his energies and, infused with new life, turned out hundreds, nay, thousands, of ‘Weekly Times,’ knowing that his friend the ‘Spook’ would be eagerly waiting to read all the news about the ‘big’ people in the Isle of Man and elsewhere.

Being rather over-eager, the paper broke, but this was soon rectified, however, and away he went again until, with a sigh of relief, knowing that the needs of the ‘big’ people in the Isle of Man were supplied, he finished his task for the evening.

Before going to bed, however, ‘The Phynnoderee’ wished to thank his friend the ‘Spook’ for his kind message, and hoped that the public telephone box, newly erected in Dalby, would be a great boon and blessing to him and all the ‘big’ people riding in Dalby district, and that they will take full advantage of this modern mean of communication.”