The setting is ‘Clouds,’ Lady Idina Sackville’s house on Mount Kipipiri above the Rift Valley in Kenya. 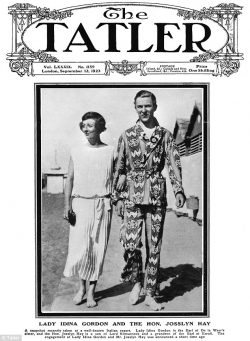 Lady Idina’s unconventional and pleasure-seeking behaviour – and indeed that of the entire ‘Happy Valley set’ (the aristocratic colonial elite who lived in Kenya between the wars) were the subject of much gossip, following the murder of her husband Joss Hay:

Other pets included two mongeese, who lived in the woodpiles on each side of the large fireplace in the sitting room and were vicious to the household cats and dogs. Ann remembered that she and Tom gave them ping-pong balls which the mongeese rolled along their stomachs before flicking them against the wall, thinking they were eggs that would smash. One night, Idina, Ann and Tom gave the mongeese some beer in a saucer, which they loved – too much – and “were soon rolling around in front of the fire – the three of us were in stitches watching them attempt to stand! It was the only time we were able to touch them.”

Note how these mongooses are here described as playing merrily with ping-pong balls, much as Gef himself amused himself for hours with a little rubber ball (later psychometrized by Nandor Fodor’s medium, Mrs Vincent). However, there is no record of Gef ever having succumbed to drink, despite visits to the Peel Castle pub.

(Idina Sackville was to become the subject of several books and films – White Mischief by James Fox, later a film; Frances Osborne’s The Bolter, a biography. Characters based on Lady Idina also appeared novels by Nancy Mitford and Evelyn Waugh).

Settlement, colonial appointments or military deployment in other countries (those of Africa, the Caribbean, or of the Indian subcontinent) – as a result of the British Empire – brought Britons into contact with mongooses, and they would sometimes bring these useful and interesting animals back with them to England. Thus, the Mitford sisters’ father David, sent to Ceylon as a tea planter and later having fought in southern Africa in the Boer War, is later recorded as having relieved the boredom of an office job (working on the publication of The Lady magazine) by bringing a mongoose with him to work and setting it to hunt rats in the building’s cellar. (A thinly-disguised account of this episode appears in Nancy Mitford’s Love in a Cold Climate).

The only mongoose I had met previously had bit me deeply in the finger, and my opinion was that the sooner all mongooses were exported to places plagued with snakes and rats, the happier the world would be; an opinion which my experience with Auntie Helen’s pair did nothing to modify. (The Magic of My Youth, p.68-69) 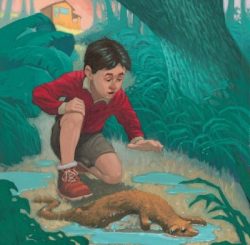 The above is all to suggest that – whilst unusual – a mongoose in Great Britain in the 1930s would not have been such a completely outlandish and unheard-of sight as might first be thought; indeed, not as unusual as a mongoose would be today in the U.K. of the 21st century, outside of zoos, safari parks and insurance adverts.