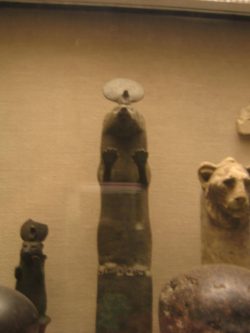 Michael Moorcock’s Eternal Champion, we may speculate that Gef has always been with us. Certainly, he spoke of having been present in the Doarlish Cashen years before the Irvings moved in; it was only their presence, he told them, that had given him the ability to talk.

At left is a photograph (courtesy Paolo Sammut) taken at the Met, N.Y.C., of an ancient Egyptian mongoose deity revered in ancient Egypt. Mention might also be made of Ninkililm, the Lady of the Mongooses from Sumer and Babylon.

A recent (July 2016) exhibition at the British Museum, highlighting sunken antiquities found at the sea bed off the coast of Egypt, features a bronze mongoose mummy case. (thanks to Clive Harper for this information)

And appropriately enough, given his self-claimed origins at Delhi, Gef appears to have had a presence in the Indian subcontinent many centuries previously. The photograph below was taken by Chris Hill during a visit to Tamil Nadu some time in 2011. This temple at Kanchipuram appears to bear the sculpted image of an angry Gef on its roof. Perhaps looking for his rubber ball, or his grubbo?