The Brooklyn Museum holds a small but rather splendid ancient Egyptian bronze statuette, which it dates between the 26th and 31st Dynasties (664-332 BCE).

The scene depicted is one in which the Pharaoh stands before an ichneumon (Egyptian mongoose). Mongoose were not uncommon in the ancient Near East or North Africa, and Egyptian mongoose in particular later became known as ‘Pharaoh’s rats’! Here, the ichneumon represents the solar god Atum, and in this mongoosely form would do battle each night with Apep (or Apophis), the embodiment of chaos and opponent of Ma’at, the Egyptian conception of order, balance, law and justice. Apep was represented by a snake; this mythological conflict between mongoose and snake mirrored real-life animal behaviour, evidently based upon observation, which may still be seen today in India in the form of staged mongoose vs. cobra bouts.

It is notable that the giant serpent Apep was known variously as ‘the evil lizard’, ‘the encircler of the world,’ ‘the enemy’ and ‘the serpent of rebirth.’ A giant snake appears to have been one of the very earliest representations of divinity, maybe even the earliest. Aboriginal Australians’ Rainbow Serpent parallels West Africa’s (and Haitian Vodou’s) Damballah, and incredibly, a recent archaeological dig in Botswana uncovered evidence that the San (Bushmen), believed to be the earliest people of all of Africa, revered a deity in the form of a python some 70,000 years BCE.

It may be that we are looking at the displacement of the original, chthonic deity by subsequent, solar deities, with the earlier god then being demonized to become a ‘devil.’ It is a very familiar and recurring pattern, described by Robert Graves in his The Greek Myths (Penguin, 1955) who saw these stories as memories of a matriarchal culture being overthrown by a patriarchal one. Apollo defeats Python and thus takes control of the Delphic Oracle. In Sumerian and Babylonian myth, Tiamat, a creator goddess, is overthrown by Marduk, a storm god; she is later portrayed as a monstrous sea-beast, the embodiment of chaos. And of course there are echoes of this eternally-recurring conflict in the Bible –  the serpent in the Garden of Eden (later shown to be none other than Satan, ‘the Adversary’) may be linked with the bronze serpent mounted upon a pole by Moses (Numbers), and with the bronze serpent worshipped in the Temple (2 Kings). Elsewhere in the Bible we are enjoined to “be wise as serpents” (Matthew 10:16). 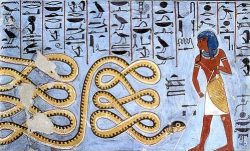 The ancient Egyptian’s word for the ichneumon was khatri, a Semitic loan word that originally meant ‘weasel’ –  Gef’s own identity fluctuates between his being “an extra clever mongoose” and “a ghost in the form of a weasel.” Early Isle of Man newspaper reports spoke of Dalby’s “eerie weasel” or “man-weasel,” and certainly the Irving family originally conceived of Gef as such. His mongoose identity arose some time later.

When explaining his origins, Gef was quite clear: he had been born on 7th June, 1852, in Delhi, India. However, he also gave a vivid description of having seen the Pyramids and the Sphinx, “rising up from the sand.”

Both India and Egypt, for the Irving family, would evidently have been exotic regions redolent of magic and mystery. We know that James Irving was an avid reader; but the only book we are certain of having been upon his bookshelf at Doarlish Cashen was Hereward Carrington’s Hindu Magic 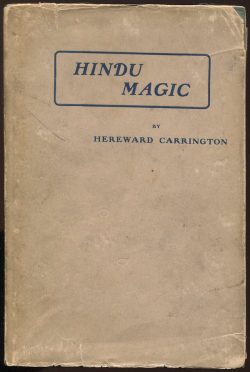 (Annals of Psychic Science, 1909), in which the author sought to “examine the evidence for the genuine phenomena, and [to] explain the tricks and fraudulent devices employed by travelling fakirs in order to deceive their sitters, and to produce their tricks.”

At the time of Gef’s first appearances, in the autumn of 1931, there was still much excitement surrounding the rediscovery and excavation of Tutankhamun’s tomb. Whilst Howard Carter’s initial discovery had been made in 1922, the excavations continued for 8 years, only being concluded in 1930. During this period, a fascination with all things ancient Egyptian was manifested in song lyrics, jewellery, breakfast cereals, soap, cigarettes, condoms … …and, of course, Hollywood films. 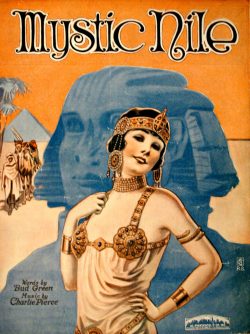 Boris Karloff starred in 1932’s The Mummy, the year in which the Gef story really began to take off, for the first time garnering newspaper attention beyond those of the Isle of Man. The plot of The Mummy features elements of a certain tale from the corpus of ancient Egyptian literature. This is the story of Setne and the Mummies, which has Setne trying to locate a magical scroll, apparently written Thoth himself. Amongst its spells is one that will give its reader the ability to understand the speech of animals.

Indeed, talking animals were themselves a familiar trope of ancient Egyptian literature. Talking cows, dogs and crocodiles appear in the Tale of Two Brothers and the Tale of the Doomed Prince, both New Kingdom (probably 19th Dynasty, 1295-1186 BCE).

Whilst, admittedly, no talking animals appear in The Mummy, the film is notable for its sinister and apparently supernatural white cat. 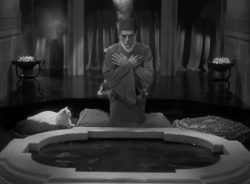 Gef was himself not confined to the physical form of a mongoose (or a weasel). On at least two occasions, he appears to have become embodied as a cat. In a letter to Harry Price’s representative and research officer, Captain Harry Dennis, James Irving recounts a curious episode:

Early in 1932, my daughter and I were alone in the house, broad daylight, and I chanced to look through the window of the room we were in, and I saw, to my surprise, a very large cat, striped like a tiger […] We ourselves did not possess a cat and I called Voirrey to come to the window to look at it. She did so, and remarked on the size of the cat, but, more especially the unusually large bull dog head it had. The cat then walked away from the door of the outbuilding, where it was standing (40 to 50 feet away from us), and I then saw it was a Manx tailless cat, and I was then a little more surprised, as the pure Manx cat is usually smaller than the English […] I thought this is no ordinary cat, so I slipped a cartridge into my single-barrel gun, and took “go” after him. Personally, I am very fond of a cat, and do not kill for killing’s sake. The cat was a little ahead of me, but easily within range, and it turned through an open gate way […] into a grass field. I was there a few seconds behind, and fully expected to see the cat, but no cat could be seen, look as I liked, the field was level, and there was not a bush or any roughness where he could have hidden, and the hedges were all earth, or sod hedges, as they are called here.… I detailed my experiences to my wife on her return that night, when Gef called out “It was me you saw, Jim.” Further explanation is beyond me.

On another occasion, three young fishermen from the nearby city of Peel had called round to Doarlish Cashen, attracted by the local gossip and media furore regarding the ‘Dalby Spook.’ Irving invited the three men to come in and sit down; whilst they were all talking together, one of the three suddenly stopped talking and could be seen motioning with his hand, as if petting an animal. He asked Irving whether he or his wife or daughter owned a pet cat, as a white one had just leapt up from the floor, and was now sitting in his lap, quite happily being stroked.

Irving explained that not only did they not have a cat, white or otherwise, but that none of his nearest neighbours owned one either … (some time later, Irving produced a signed statement from the fishermen, attesting to the truth of what they had seen).

[I am indebted to Dr Megaera Lorenz for much of this post’s content. Dr Lorenz recently graduated from the University of Chicago’s Egyptology PhD program, and occasionally teaches courses through the Oriental Institute Museum’s Public Education office]