If it was fame Gef sought, then it was an inspired choice of his to swap identities from weasel to mongoose. Perhaps on account of its faintly comical name, and also as a result of the well-known literary character of Rikki-Tikki-Tavi, a mongoose was sometimes the subject of a light or comedic news item in the mid-twentieth century press.

Thus, Victor Thompson’s regular ‘Animals Are Funny’ column for the Sunday Pictorial (18 August 1935) chose to focus on Monty, one of a dozen mongooses resident at London Zoo. The story, headed ‘Monty The Kleptomaniac: Took To Crime After Giving Broadcasts’ 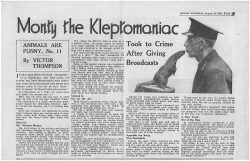 hints at Monty’s possessing one or two Gef-like characteristics, namely, a love of attention, “he is one of the most popular exhibits” at the Zoo, on account of his being a “a natural comic. He greets nearly all visitors with shrill squeals of delight, and as soon he has attracted a big enough crowd he goes into a kind of can-can dance.”

Another similarity to Gef was Monty’s propensity for stealing small objects, such as a lady visitor’s earring, fountain pens, handkerchiefs, gloves and bags of sweets. Thompson states that “all mongooses are greatly attracted by bright things […] which they hoard with a jackdaw’s enthusiasm” – reminiscent of Gef, returning to Doarlish Cashen from his travels around the Island, bearing trophies such as a paintbrush, a pair of pincers, some gloves.

Monty’s ‘broadcasts’ refer to his appearance on a BBC radio broadcast from the Zoo, which was, of course, Price and Morrison’s dream – to be able to get recording equipment in place at Doarlish Cashen, and put Gef on the radio. Monty’s mischievousness adds another point of comparison with Gef: “He began to interfere with his keeper’s cage-cleaning by snatching dusters and upsetting pails.”

This piece was published one month prior to Price’s ‘The Talking Mongoose’ article for the Listener (11 September 1935). But renewed interest in mongooses generated by the latter was perhaps responsible for Thompson’s follow-up ‘Animals Are Funny’ piece in the Sunday Pictorial, another mongoose-interest story, this time headed: ‘Jealousy Among The Mongoose: All Those At The Zoo Seem To Hate Each Other’ (16 February 1936), in which we learn that the star of 1935, Monty, was in fact a female mongoose, Montie. Thompson now focussed his attention upon George, a definite male mongoose. George enjoyed running on a treadmill inside his cage, left by its previous occupants – squirrels –  and ogling female mongooses, including Montie. He apparently had a party trick of hiding behind peoples’ ties and refusing to move (see photo below left).

“Where he springs from the keeper never knows […] For George has to move fast. For generations it has been the business of George’s family to kill snakes, and when you’re tackling an angry cobra you either move quicker than the snake or never move any more.”

Another mongoose in the media, Mr Magoo, whose plight became a cause celebre in the Mid-West of the USA in the early 1960s again shows the enduring appeal of these little animals. Mr Magoo was a popular attraction at Duluth Zoo in Minnesota. He was noted for drinking tea, and, like Gef, “eats a little meat and vegetables and drinks a little milk. Its favorite is warm tea with sugar…” as the Zoo’s director, Lloyd Hackl (see photo below left, with typewriter and mongoose) explained. “It has the coloring of a squirrel, but with yellowish-brown eyes and the reddish cheeks and a throat all mongooses have in common.” (Duluth News-Tribune 13 November 1962)

Magoo had been donated to the Zoo by a foreign sailor whose ship had docked at India, and he quickly became a favourite amongst the public. Unfortunately, in 1962, Magoo came to the attention of the US Customs, who declared that – under a 1909 U.S. Fish and Wildlife Service regulation, which barred the importation of mongooses – Magoo must be killed. Duluth’s Harry Nash, head of the city’s recreation department, appealed for clemency, writing to the Fish and Wildlife Service and explaining that Magoo was “very popular with adults and children and is clean, healthy and well-mannered.”

To learn what happened next, read: DULUTH MOBILIZES TO SAVE NEW PET / News-Tribune / Duluth mobilized Friday night to save its pet mongoose from the federal executioner and also Mr. Magoo The Mongoose, Part 2