The Brief Wondrous Life of Oscar Wao, a 2007 novel by Dominican-American author Junot Díaz, contains elements of magic realism, not least for its repeated motif of the appearance of supernatural and mysterious mongooses.

Set in New Jersey, the novel is centred on the character of Oscar De León, an overweight Dominican schoolboy whose inner life is dominated by fantasy and science fiction novels, girls, and fukú, a family curse that Oscar believes has beset his own family for generations.

Mongooses are portrayed as benevolent, acting as helpers and guardians.

“The mongoose plays a critical role in saving the lives of two people: Oscar and Belicia [his mother]”

They represent zafa, a form of protective magic acting in opposition to the fukú curse. Like the de Leon family in New Jersey, the mongoose is an immigrant, an outsider, having been imported to the Dominican Republic in order to protect the precious sugar cane fields from the ravages of rats.

In one episode, Oscar’s mother becomes lost in a cane field and is rescued by a mongoose, a “creature that would have been an amiable mongoose if not for its golden lion eyes and the absolute black of its pelt.” [1] By singing to her (Gef also liked to sing!), the supernatural mongoose guided her out of the maze-like cane field, and later prevents a bus from hitting her and causing grievous injury.

Oscar, too, has his own experience of a golden mongoose, described as having “Gold-limned eyes that reached through you, not so much in judgment or reproach but for something far scarier.” [2]

This mongoose appears to him suddenly at a time of great crisis in his life (he is about to kill himself by jumping off the New Brunswick train bridge), and then it disappears (“Vanished!”). Like the debate as to Gef’s true nature, Díaz’s novel doesn’t make explicit whether these mongooses are flesh-and-blood, corporeal animals, supernatural entities, or figments of his characters’ imagination. It’s not clear whether Oscar’s mother’s encounter with the helpful mongoose in the cane field “was a figment of Beli’s wracked imagination or something else altogether.” [3]

Like Gef, Junot Díaz’s mongooses are the helpers and protectors of ordinary people: “an enemy of kingly chariots, chains, and hierarchies… an ally of Man.” [4] In Díaz’s novel, the de Leon family are at odds with the dictatorship of Trujillo, and the mongoose offers help to the lowly as against the mighty and powerful. 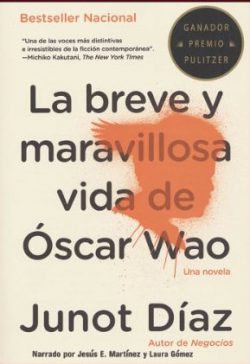 One may recall Gef’s rabbit-catching exploits on behalf of the impoverished Irvings; his keeping the farm outbuildings free from rats and mice; and his role as Voirrey’s defender when she was mocked and tormented by school bullies.

In an interview, author Junot Díaz is asked,
“What does the mongoose means to you and in relation to Dominican Republic history?”

The mongoose is funny because he’s my favorite character. He is the only real character. In the Díaz family cosmology, he’s the only real character in the whole book. There’s a story my mom tells about encountering a mongoose. […] That character comes out of a childhood in the Dominican Republic being exposed to mongoose. And you see them and as a kid [but] you’ve never seen anything like it. They are extremely fast, extremely social, and clever.

And then of course you discover that they are immigrants to the island. There was something that pulled me about the image of another transplant – who is a really wild little trickster. In “Oscar,” there is the actual footnote on the mongoose, where the narrator says that these could also be aliens.

I couldn’t explain it while I was writing it, but there was something about this family’s history that provoked an assistant from this mongoose character. It is almost as if because their life was so shitty, they are able to gain this luminous intervention from what might be an alien.